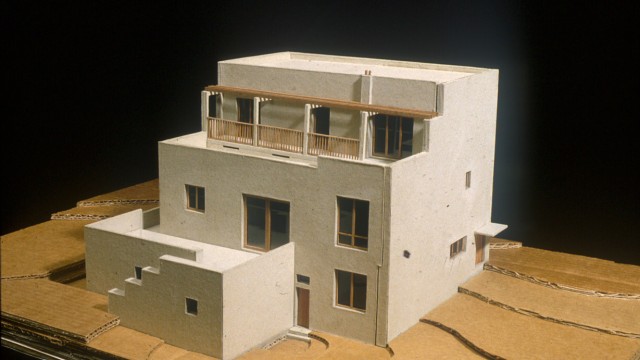 ADOLF LOOS has a special place in Viennese and, hence, also in international architecture.

To Adolf, architecture was an important means of providing people with the possibility of an up-to-date, that is to say, a truly modern lifestyle, rather than being an isolated form of art.

Throughout his life, this so – called modernist was in opposition to Josef Hoffmann, whose formal variety of the later years he never ceased to castigate. As the main difference between Adolf Loos and Josef Hoffmann can be regarded the strict distinction between art and craft of Loos. This can be regarded in contrast to the leveling of art and craft by Josef Hoffmann and the Wiener Werkstatte. The radical defense of his theories and his article “Die Potemkinsche Stadt” in a very polemic manner led to the final break with the leading architects of the Wiener Secession: Josef Hoffmann and Josef Maria Olbrich.

The house seems to be built in Haifa in 1938, not like it was designed for project 152 but with a flat roof and plastered walls. In this house for a doctor, there is a large practice at home but totally separated from his private life. Another difference with house 152 is that its veranda is here a waiting room for the patients. However there are no photographs of the house that was built, so we cannot verify the changes. Perspective drawings that we have reconstructed give a good picture of the quality of the house. (http://agram.saariste.nl/scripts/index.asp?dir=loos)