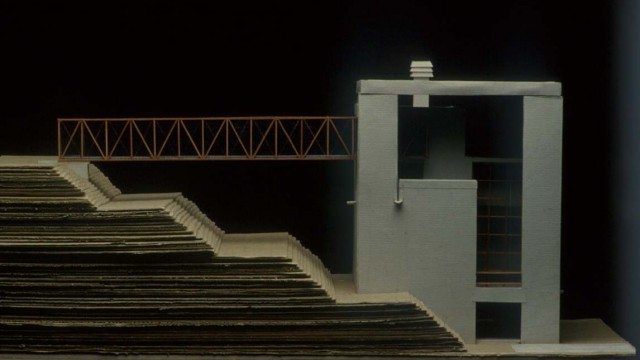 About the House :
The Bianchi house in Riva San Vitale was designed by  the architect Mario Botta in 1972  and is located in Riva San Vitale, Ticinio, Switzerland. The house faces Lake Lugano and distant snow capped mountains. The entrance is located in the upper most level by a steel bridge painted red. The bridge is a way to establish a physical relationship between the mountain and the structure. The outside of the building is made out of concrete blocks. While the inside is still mostly concrete, the walls are painted white. Each side of the building has some sort of architectural slit. The east and south facades open up to the lake, therefore the slits on these sides are larger to frame and “select a scene.” These slits also allow for natural lighting and ventilation. The slits on the west and north facades are smaller because they face the slopes and winter cold. The house is located around a centeralized staircase. The staircase is placed in the heart of the structure, but not the geometric center. The staircase divides the smaller service spaces to the north west and the larger outdoor balconies, terraces, and living spaces to the south east.